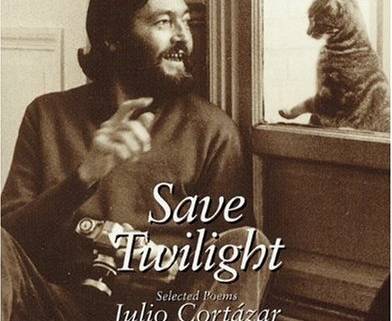 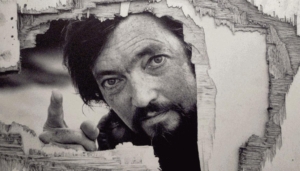 I purchased a copy of Julio Cortázar’s Save Twilight (City Lights Books, 1984) years and years ago. I remember that I was trying not to spend any money at the time, but I told myself I would give the book to my friend Paul as a birthday gift. Almost every year, I think, “Aren’t you going to give this to Paul?” And then I reread it. And I keep it.

Cortázar was born in 1914, to Argentinian parents, and spent his childhood and youth in Argentina. He is primarily known as a novelist and was a revered and early influencer among Spanish-speaking writers. He died in 1984, and if I had known he was buried in Montparnasse, I would have visited in 2019 when I was in Paris. Once again, I pick up the book and it works its magic (“my loves, my drinks, my smokes….little black book for the late hours” [87]).

The City Lights edition of Save Twilight offers the Spanish first, and then the English translation. The poems are interspersed with prose reflections (advised not to, he reflects, “I carry on stubbornly convinced that poetry and prose reciprocally empower each other and that alternating readings won’t do any harm” [25]).

Tonight, seeking your mouth in another mouth,
almost believing it, because that’s how blind this river is
that throws me into some woman and submerges me in her eyes,
and it’s sad to swim finally to the shore of sleep
knowing pleasure is that lowlife slave
who accepts counterfeit coins and circulates them, smiling.

Forgotten purity, how could I hope to recover
that ache of Buenos Aires, that ceaseless, hopeless expectation.
Alone in my open mouth above the port
to begin being in love with you again,
to meet you again over the morning coffee
with nothing that can’t be forgiven
having occurred.
And without my having to remember this oblivion that rises
to no purpose, to erase your squiggles from the blackboard
and leave me nothing more than a starless window.