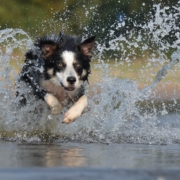 In a previous life, I was a waitress…before that, a farm girl. I spent a lot of my farm-girl childhood pretending to be a horse named Stormy. I think somewhere in time I was a tree.

In my next life, I’d like to teach a class called “Writing YOUR Memorable Poem,” and this is one of the poems I plan to use.

It’s a weird poem, really, more a surreal little short story. But from the time I first came across it (almost 20 years ago, in The New Yorker), it has stayed with me. Maybe the spell James Tate (1943-2015) weaves has something to do with the repetition. (Dog, for the most startling instance, is repeated  9 times.)

Tate’s Poetry Foundation profile quotes from his interview with The Paris Review: “There is nothing better than [to move the reader deeply]. I love my funny poems, but I’d rather break your heart. And if I can do both in the same poem, that’s the best. If you laughed earlier in the poem, and I bring you close to tears in the end, that’s the best.” That’s exactly what this poem does for me.

I was a dog in my former life, a very good
dog, and, thus, I was promoted to a human being.
I liked being a dog. I worked for a poor farmer
guarding and herding his sheep. Wolves and coyotes
tried to get past me almost every night, and not
once did I lose a sheep. The farmer rewarded me
with good food, food from his table. He may have
been poor, but he ate well. And his children
played with me, when they weren’t in school or
working in the field. I had all the love any dog
could hope for. When I got old, they got a new
dog, and I trained him in the tricks of the trade.
He quickly learned, and the farmer brought me into
the house to live with them. I brought the farmer
his slippers in the morning, as he was getting
old, too. I was dying slowly, a little bit at a
time. The farmer knew this and would bring the
new dog in to visit me from time to time. The
new dog would entertain me with his flips and
flops and nuzzles. And then one morning I just
didn’t get up. They gave me a fine burial down
by the stream under a shade tree. That was the
end of my being a dog. Sometimes I miss it so
I sit by the window and cry. I live in a high-rise
that looks out at a bunch of other high-rises.
At my job I work in a cubicle and barely speak
to anyone all day. This is my reward for being
a good dog. The human wolves don’t even see me.
They fear me not.

—James Tate, Return to the City of White Donkeys (HarperCollins, 2004)

So here’s your assignment: who or what were you in a previous life? Was there something you accomplished in that life that landed you here? 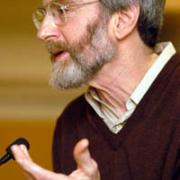 A friend told me to please, please read this book. It is dedicated to my friend’s mentor and dear friend, the late Tony Hoagland (1953- 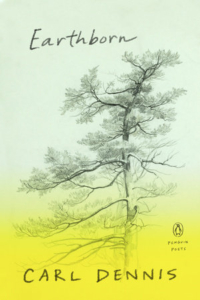 2018), and includes passages from his Sweet Ruin and a poem memorializing him. So, I found a copy on-line and I read the whole book this morning.

I should mention that my initial impression was that this poet was not my cup-of-tea. But I got up early today and drove one of my daughters to work, and for about 26 minutes (our entire drive), she recounted in excruciating detail how much the boys in her senior high school class hate the novels they are reading in English class. How they gripe constantly, tell her she’s stupid for choosing the books (she didn’t choose them), plagiarize their assignments from Spark Notes, etc. So. Even though Dennis’s poems didn’t seem — at first — what I wanted to read, I decided to set aside all pre-judgment and lose myself in the poems.

The magic worked. I ended up being engaged — even charmed. I found myself wanting to write a Bethany-Reid poem “in the style of Carl Dennis.”

Earthborn is brand new, published just last month, Carl Dennis’s 13th volume of poetry. I believe I read his 2001 Pulitzer-winning book, Practical Gods, but it’s been a long time since I sat down with his poems. Poetry Foundation helped educate me about Dennis’s philosophy and approach to poem-writing (and I recommend reading that, too), but — in my own words — each poem in Earthborn is like a thought-experiment. “Nothing is improved by being praised,” begins the first poem; another: “Once the seasons were gods…” Another addresses Socrates. The Puritans turn up, and Columbus. And Tony Hoagland. Not that any poem is the same as any other.

In the first poem, Dennis writes, “I want to be one of the witnesses of the familiar,” and that, as much as anything I read about him, helped me to understand his voice.

The opening of his poem, “Primitive,” offers an example of what I think I mean — a sort of address to a religious idea:

It wasn’t a conviction that life is holy
That kept me from drowning the spider I found
In the sink this morning, that caused me instead
To cover it with a cup, slide a postcard beneath it,
And carry it out to the patio. It was more
The thought that it seemed unfair to kill it…

I had a sense of him, picking up each idea of a poem and turning it, one way and then another, like a faceted stone. What if I hold it this way? What if I set it at this angle in the light?

Here’s one poem that got me thinking about how some novels are thought-experiments (maybe they all are) — what if the character made this choice…what if she made this other choice?

It’s no surprise that in fiction the central figures
Tend to learn more by the end than people
Commonly learn in the actual world,
Where many keep making the same mistakes.

Novelists start with their own experience,
Which includes going to bed convinced
That their current project is almost finished,
Only to find, in the candid light of morning,
That it still needs many more months of work.
What better proof that learning goes on
Even in sleep, that one’s sense of fitness
Grows in the night like corn or bamboo?

Is the newest version truer to life
Or simply more shapely, more charming?
Sometimes it’s hard to tell.
The hero before was recognizable,
A man, say, liable to fritter away his life
In random pastimes. But now he does more
To resist his temperament, so readers,
Instead of looking down from on high,
May be willing to stand in his shoes awhile.

As for the heroine, the revision suggests
She is still a woman who hides,
Beneath her apparent warmth, a seam of coldness.
But now the coldness conceals a wound
That makes trust a challenge.
Now she wants to know where her courage
Is supposed to come from
If she can’t find it when she looks within.

The more they learn, the truer they are in spirit
To the fact that every draft of the novel
Is another chapter in the single story
Slowly unfolding in which the author
Learns by trial and error what the work
Needs more of to be complete.

In the meantime, it’s clear that the hero’s remorse
Near the end of the manuscript for the grief
His want of direction has caused the heroine
Is more convincing than it’s ever been.
Instead of giving a speech that seems
Too polished to be spontaneous,
He seems to be groping for words, not sure
What he’ll say until he says it, and then
Not sure if he ought to be satisfied
Or open to one more try.

When I Googled Dennis, I found a number of videos on-line, and poems at The New Yorker. I hope you’ll take a deeper look.