You are here: Home / Blog / Saltwater 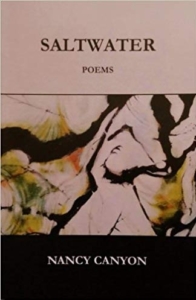 childhood abuse and loss to healing. Though the chronology is from childhood to womanhood, the poems also march from a closed, inner space, claustrophobic, smothering — to an openness where even “skin to skin” contact evokes “meeting in the wilds, / running in meadows.” On the back cover, Mary Gillilan describes how Canyon “bares her soul in order to free it in poems told with white-knuckle honesty” — concluding, “Saltwater delivers the life of a woman from the inside out.”

I emailed Nancy with a few questions and she emailed back, generously sharing her publishing history (a novel, Celia’s Heaven, and an ebook of short-short fiction, Dark Forest, a memoir, forthcoming) and her influences:

I have put together a number of poetry books that I haven’t published yet. They sit on my computer, waiting I guess for a big collection of my poems, since I have over 150 poems in just one file. Many poems I’ve written during February Peace Poem month, April poetry month & August postcard month. Most of the poems I have published are in anthologies, such as Take a Stand: Art Against Hate, This Uncommon Solitude, and For the Love of Orcas. I favor World Enough Writers and the work Lana Hetchman Ayers does. I have a poem in her anthology Ice Cream Poems titled “Outdoor Theater Church.” And another poem, “The Thing He Secreted,” in Last Call. And I do love Crab Creek Review, where I was a fiction editor back in 2007. The journal was then run by some of my good friends Kelli Russell Agodon & Annette Spaulding-Convey. Kelli and I went to graduate school together at PLU. She is the person who got me started writing poetry. Writing poems helped my fiction, and it gave me a reprieve from writing long documents.

Nancy is also an accomplished artist (see her website to learn more) — no surprise as you can see both the arc and the artistry in the poems: some quite short, some in blocks of prose, some in shapes, but always with an artist’s deft touch  (“eyes vacant / as flat primer”). I asked Nancy about how she ordered Saltwater and she confirmed my suspicions: “As for ordering poems…I like connecting the story, color, theme or image within a poem to those elements in the next poem.” When I went back to the book, I could see this pattern everywhere. One poem, “Outdoor Theater Church” includes lines of a new father’s commands; the next poem, “Housekeeping,” begins “Father says: Clean your bedroom.” In later poems a twist of green in one poem leads to a raven’s whirling dance in the next.
It was a challenge to choose just one poem, but I think this one. It’s a late poem in the book, but the “sleeping children” carried at the end took me straight back to the opening:

A raven danced on my roof tonight.
He whirled beneath a silvery moon
dangling from an invisible thread in the sky.

Like a coin flicked by a child, we spun at the peak,
burning a smoke signal of gratitude to Great Spirit
for carrying sleeping children in His arms.