Blog
You are here: Home / Blog / Poetry / Cat Kigerl’s At the Town Cafe 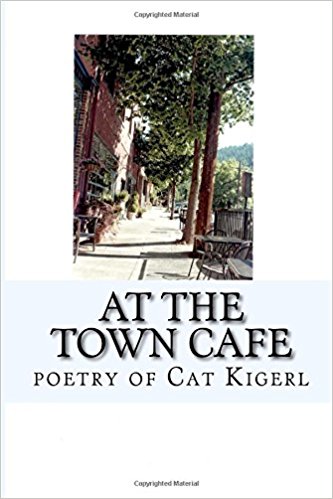 Having just spent four hours at Urgent Care with my daughter (whose sore knee checked out just fine, after all), and having read my book for today, how much work is it to type up a short poem and add a few links to a blogpost?

My main question with each of the books I have read this month has been, “What can I learn from this poet?” Some have been a stretch (all the more reason to take them on), while others, even while they affirm my own tendency toward place and narrative, show me something new about the line.

Cat Kigerl’s At the Town Cafe is published by Goldfish Press — which is publishing my forthcoming book — and for that reason alone I thought it was worthwhile to spend some time with her poems. Although she hails from northern California, and I have not met her, I knew her name from August postcards.

Kigerl’s first book of poems, Stirring Up the Water, won the Native Writers Circle of the America’s First Book Award. I’m finding a theme in that — and  I took note that one of her poems (“Upon a Farewell”), includes an epigraph from Sam Hamill: “Basho didn’t know a thing about water / until he heard that frog.” Throughout the book, Kigerl shows a willingness to dwell on the particular that reflects the whole.  Her final poem, the title poem, is long (6 sections; 4 pages), but unveils facet after facet (and cat after cat) visible from the town cafe. But here, a short poem, nicely capturing her own Basho-esque vision:

What is it about the constancy
of passing days, of each morning’s arrival
with its cloudy skies
its non-promise about tomorrow
in the teak-tinted light?

There is a tranquility
of the tree-shrouded shore
old fancies swaying in an imagined wind
the fluty chorus of morning birds
announcing a hidden sun
edging into the passing moments.

Thomas Lux’s To the Left of Time