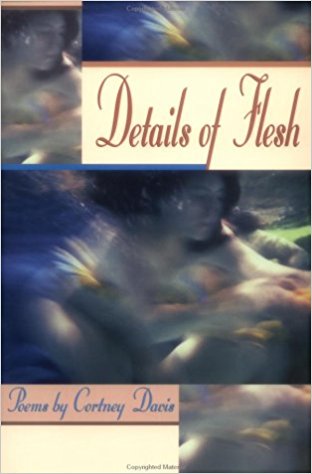 Cortney Davis‘s Details of Flesh has been on my shelf since it was first published by Calyx Books in 1997. A couple of times I’ve come close to giving it away, but on each occasion I thought twice. A nurse practitioner, Davis writes about issues that matter to me. Shouldn’t I reread her poems before letting them go?

Short answer, yes. As I read, I thought of the nurse’s aides who care for my mother, of the RN’s who change her catheter twice a month, of the nurses in hospitals who cared for my father after his open-heart surgery, and, ten years later, after his stroke, during his final week in the ICU. Davis often writes of children and young women, but the indignities of the flesh, the beauty of the flesh — these are omnipresent throughout the book. It takes a calling to do such work. Reading about it gives me heart for my own work.

When I pluck the suture
or pack the ulcer with gauze,
it becomes my task
to introduce rage to this body

that calls me nurse, nurse,
as if my hands were gold.
I cradle the body
like a mother rocks.

I lean close
and let it memorize my face.
Then, I begin.
First, something subtle.

A hasty scrape.
An accidental pinch
as if I might thrust needle
down to bone. The body

raises its hands in disbelief!
This is nothing. I thread veins
with catheters of fire,
I change morphine to milk.

When the body asks why?
I am silent. When the body
whines, I act bored
and turn away. If sleep comes

I sneak in and shake the body
until, angry and squinty-eyed,
it rises on its elbow
and stares at me, at last understanding

that the flesh is everything.
This is the body I love–the one
that laughs down death’s trumpet.
The one that escapes.

Joannie Stangeland’s In Both Hands

Thomas Lux’s To the Left of Time
Scroll to top