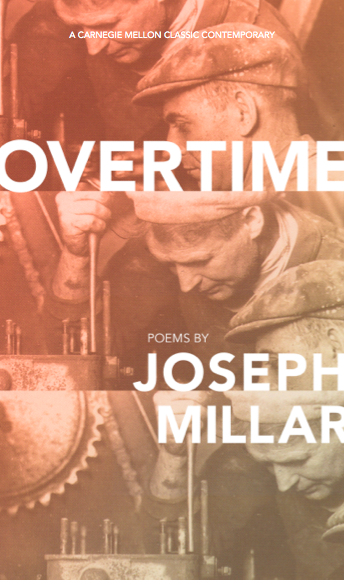 “Poetry is often regarded as a mystery, and in some respects it is one. No one is quite sure where poetry comes from, no one is quite sure exactly what it is, and no one knows, really, how anyone is able to write it.”
–Kenneth Koch

Here is a poem from Joseph Millar, who I was fortunate to take a workshop with — on depicting physical work in poetry — at LitFuse two years ago. He introduced me to (or reminded me of) Ideas I have been crunching up against ever since. “Family Therapy” is from his 2001 book, Overtime.

My brother’s brown eyes narrow
when I tell him about the money
I stole to pay Christmas bills,
the lies I told the IRS and the bursts
of cruelty to my son,
how close I came last week
to picking up a drink.

He slides the five-eighths boxwrench from its case
and leans under the hood,
tells me to pry up against the alternator.
The belt’s too loose, he says.

An evening breeze rustles down the pavement
as my niece comes out of the house,
long hair draped beside her face,
and leans against the fender.
Go back inside, he tells her.
Bring us a Coke. Then he turns
on me. Fuck
the government, he says.
Do you want to starve? He swipes
at the grease on his forehead
and the big knuckle on his right hand
bleeds down onto the wheel well.
Back off some on that pry bar
or we’ll break this goddamn thing.

The pale fists of the hydrangea bump
against the fence and a light
comes on in the kitchen, its glow
sifting onto the driveway
as his wife opens the screen.
Everybody yells at their kids,
he says quietly,
tightening the bottom bolt.
Get in and start it up.
We need to go for a ride.

Dorianne Laux, “On the Back Porch”
Scroll to top