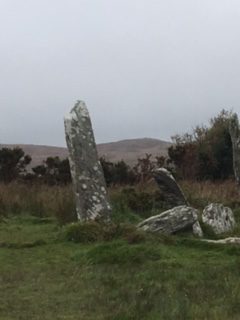 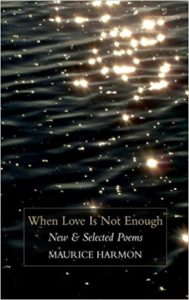 I blogged about Maurice Harmon‘s Love Is Not Enough in April 2018 (click on the link to go to that longer post). His 90th birthday is coming up fast, and though I can’t be in Dublin for the party, I thought rereading his book and sharing another poem would lessen the distance.

As I’m working on a poem of my own about walking, I wrote this stanza into my journal this morning —

I could make magic too.
But this is real, the old road part of me,
an artery strafed by rain, the bay
from Skerries to Clogherhead a seething cauldron.
I cycled this road to Streamstown,
the ditches filled with Queen Anne’s Lace,
hawthorn’s communion cloth,
the chestnut’s candlelabra,
the rowan’s offerings
beech canopies,
grasslands kings desired,
woods ringing with song,
sturdy stands.
My holy road, my pilgrim path, my royal way.

from “The North Road”

Love Is Not Enough includes a range of Harmon’s work, and he never flinches from the controversial (see his long poems about the Catholic Church, Irish politics, and academe). Harmon is a scholar-poet, and other books include a translation, The Dialogue of the Ancients of Ireland (2009) and the anthology, Irish Poetry After Yeats (1978, 1998). His more formal poems (rolling rhythms, unexpected rhyme) are my favorites.  This poem, for instance, which first appeared in The Last Regatta (2000):

We lived so far from town I did
not go to school for years,
truant of woods and shore.

I knew the ways of birds,
could track the rabbit and the fox,
guarded the hens against the hawk.

When goats were born I raised
them as my own, when pups were drowned
I mourned, but loved the one we saved.

I got no marks at school for flinging sticks,
could neither read nor write, so late
to class the Catechism was my ABC.

Christ sat upon the mat. Morality was strange:
commandments, mysteries, big sins, little sins.
I was a rabbit trapped within the furze.

I reared away from priestly bit and ban.
I shied from sin. What I knew best
was climbing slowly through dreamy firs

until I hung above a swaying world,
could see the castle turning on its hill,
could feel the ocean roll toward Rockabill.