Blog
You are here: Home / Blog / Uncategorized / My top ten vs. Hemingway’s… 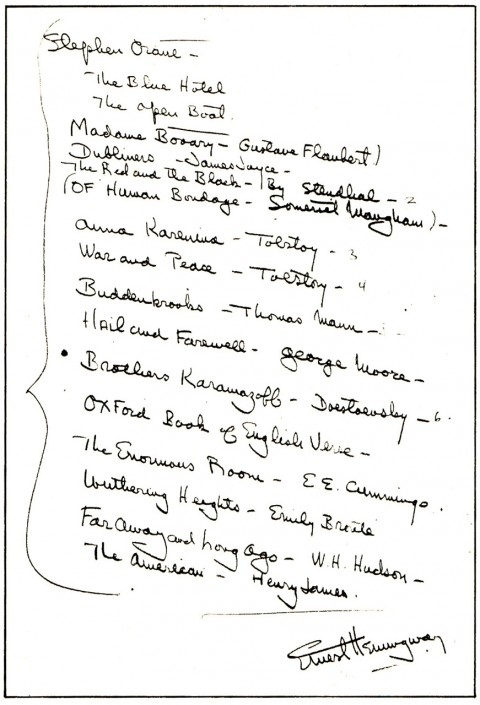 I have read most of these books, and all of these authors with the exception of Thomas Mann and George Moore (I don’t know how I have managed to avoid Mann; he is one of my husband’s favorite authors). But in numerous ways this list bugs me, so I thought I’d blog about what I might put on such a list.

I am happy to see Emily Bronte’s Wuthering Heights on Ernest’s list, but where are the other women? By all means, read Dubliners (read it once a year), read Dostoevsky and Tolstoy and James. But on my top ten list you will find instead of W. H. Hudson, Rumer Godden (start with An Episode of Sparrows). Look up the Joan Acocella’s essay, “Assassination on a Small Scale” about Penelope Fitzgerald, and then read Fitzgerald (start with The Beginning of Spring). If we’re talking strictly classics, then we can at least get Jane Austen on there, and the other Bronte sisters.

A list of ten books–from anyone–probably can’t do justice to one’s personal tastes. Where is Herman Melville and Nathaniel Hawthorne and Mark Twain on Hemingway’s list? What about William Faulkner? What about Toni Morrison? Of course you have to read Graham Greene. The Heart of the Matter and The Power and the Glory are probably my favorites. Another one I’ve reread is The End of the Affair. Rereading…although it’s been a few years, A Tale of Two Cities by, of course, Charles Dickens, is a book I’ve read numerous times.

Read Zora Neale Hurston’s Their Eyes Were Watching God. Read Eudora Welty’s The Optimist’s Daughter. Oh, and how about Carson McCuller’s The Heart Is a Lonely Hunter?

There. I feel better now. What do you reread?

…on your willingness to acquire knowledge about hidden parts of yours...

Finding a Voice
Scroll to top