“Writing and reading poems is a way of seeing and naming where we have been, where we are and where we are going with our lives.” -John Fox

I saw this book, POETIC MEDICINE: THE HEALING ART OF POEM-MAKING, by John Fox, at a friend’s house. She hadn’t read it yet, but promised to forward her recommendation. I remember that day, that writing session, especially, because, as we were finishing, her front yard suddenly filled with all sorts of birds. I think it was a precursor of the weather that was sweeping in, but it had that feeling of an omen. When I spied Poetic Medicine on the shelf at Half-Price Books, I remembered those birds, and I bought it.

While visiting my mom over the last couple of days, I packed the book with me, and read in all the interstices. Some gems include the preface by Rachel Naomi Remen, and an abundance of poems from every where, including this one by Wendell Berry, which spoke directly to the emotions I’ve been dealing with these last few weeks. I started in September to work on a series of poems about my dad’s death, and wings seem to push their way into every poem. I’ve been trying to read between the lines of my drafts, and see what this is saying to me, what it’s saying that hasn’t already been said by so many others. And this book is helping. So, the poem:

To Know the Dark

To go in the dark with a light is to know the light.
To know the dark, go dark. Go without sight,
and find that the dark, too, blooms and sings,
and is traveled by dark feet and dark wings. 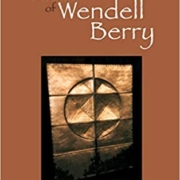 Your Inner Anthropologist
Scroll to top