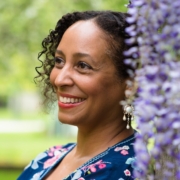 What on earth am I to say about this stunning collection of poems? 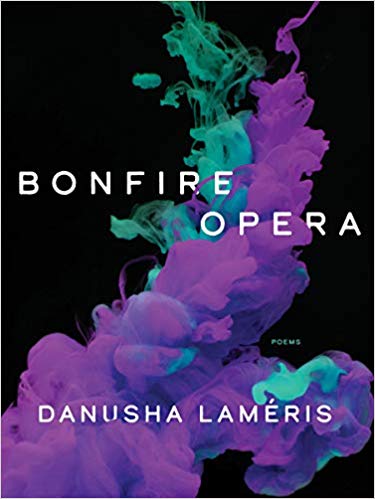 Both elegiac (“nothing, now, but a few fistfuls of ash. Not even that, since ash / dissolves and is taken…”) and a celebration of the body’s pleasures (“To feel the way / it lifts up the octaves of sky”), Bonfire Opera took a fillet knife to my emotions, laying them wide open.

I’m not alone in my assessment of its paradoxes, and its beauty. On the back cover, Colleen J. McElroy describes the book as “a vibrant folk opera….a balance of music and imagery.” Dean Rader writes: “Everything is alive in these poems, even loss. Even death. In these finely crafted lyrics, worms, berries, skin, hawks, dirt, and desire exist and even thrive in a symbiotic relationship…”

Some of the poems are long, and begin the way a conversation or a story might (“It was late afternoon and we were standing / on the deck”; “In those days, there was a woman in our circle…”) But poem after poem stretches itself into a crescendo of sounds and images. In the title poem (the one beginning, “In those days”):

…a voice lifted into the dark, high and clear
as a flock of blackbirds. And everything was very still,
the way the congregation quiets when the priest
prays over the incense, and the smoke wafts
up into the rafters. I wanted to be that free
inside the body, the doors of pleasure
opening, one after the next, an arpeggio
climbing the ladder of sky.

I wish I could read the whole book aloud to you, over a dinner of persimmons and salmon. But for now, just one poem. I chose this, by the way, in part because it hurled me back in time about twenty years, but also because it so well explains why Laméris won the 2020 Lucille Clifton Legacy Prize.

And here it goes, again, the body
hauling one out of the ovary
like coal from a mine,
lifting it up from the mother lode
by the frayed wires of late progesterone.
I can feel the familiar cramp
of effort it takes to summon
a lone ovum: my forty-odd year friend,
my little homunculus, my dwindling sack
of genetic gold. How many moons
have I carried you deep inside the secret stores?
You came into this world with me,
down the narrow birth canal, buried in the girl
until the first blood. And here we are, still
performing our same old reproductive ritual,
more formality than use. A mock battle
staged by aging warriors, turned allies.
Childless, I’ve called myself—
a son in the grave, and another seedling
gone to ash. But now I see
how far we’ve traveled together,
me and my specks of yolk,
sealed in the same skin,
spores caught in their pinules
beneath the fern’s curled fronds,
barnacles on the back of a whale,
nuggets of ore covered in silt.

Sometimes, as I read, I think about who I might pass the book along to. But this book is one I’m going to hold onto. Like her first book, The Moons of August, it demands savoring.

You can read more about the poet, and several poems, at her website, and at Poetry Foundation. It is National Poetry Month, and having gone through all of my books in March (and letting go of a great number of them), I thought I would read an entire poetry book, each day in April, and then tell you about it.

A few years ago, when AWP was in Seattle, I attended a presentation featuring readers from The Sun, and that is how Danusha Laméris hit my radar. As soon as I got home, I looked her up and ordered her book. The Moons of August, I learned, once it was in my hands, was selected by Naomi Shihab Nye for the 2013 Autumn House Press Poetry Prize. When I read the list of acknowledgments in the back (Ellen Bass, Dorianne Laux, Joseph Millar), I knew that I was surely destined to find her.

Laméris writes poems that so delight me, poems I have read over and over again. A few of her poems overlap with my own themes (for instance, “Fictional Characters,” which begins, “Do they ever want to escape? / Climb out of the white pages / and enter our world?”), but more often poems that I simply wish to goodness I had written. I write her poems into my own notebook, and see if I can imitate them, determined to write something that will please me half as much.

The Moons of August is like a series of hallways and stairwells that take you deeper and deeper into a house. You turn a corner and find a picture of her late brother, or her lost infant. Sometimes, you find hieroglyphics or cave drawings on the walls. There’s the funny story about her mother measuring penises, that turns into a reflection about God counting the hairs on our heads. We see people walking ahead of us, catch only a glimpse of Jack Gilbert or Temple Grandin as they disappear into a basement or climb out a window. Humor and heartbreak and a wry, forgiving and encompassing compassion are threaded all the way through.

I was thinking of the difficulty of picking just one poem to share with you, and then, I reread this poem. In it, Laméris displays that wonderful Ted-Kooser-like ability to take an ordinary moment in a woman’s life and turn it into something extraordinary. 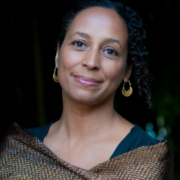 If I could, I would reproduce a dozen poems from Danusha Laméris‘s luminous book of poems, The Moons of August. Poems about losing a child, about losing a brother, about horses, about trees, about reading; somehow all hanging together and making up a coherent volume about grief and loss and healing.

I first encountered her work at the AWP conference in Seattle last year, when she read for The Sun. I sat mesmerized, wanting to go someone to sit alone and write. So, I share this poem in the spirit of wanting to inspire you to write with me.

After much thought (and partly because it is so late in the day), I’ve decided to share just this one, very short poem. I hope it teases you just enough that you will look into her work. If you go to her website, you’ll find a link to Garrison Keillor reading her poem, “Fictional Characters,” which is one of the poems she shared at AWP.