I decided two weeks ago that I would read some poetry each morning–searching for peace & justice there, if lacking 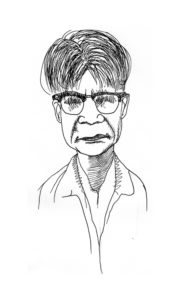 elsewhere–and write something of my own. My general feeling is to put more into the world of what I want to be there.

For the last two days I’ve been reading Koon Woon‘s Water Chasing Water (Kaya Press, 2013) and feeling my own heart swell upwards as if on a rising tide. Other reviewers have described him as a “writer of solitudes,” but I love the community Koon Woon invokes in almost every poem. I love his poems for his father, poems about sleeping under bridges, about the Chinese waiter reading Nietzsche and dreaming a writing life into being. In this time of madness and isolation, he gives me hope.

Yesterday I copied out this poem:

I know now the startling animals and their flying droves
in my wooded new neighborhood,
see the sadness waiting for the return of warm spring rains,
the threat of inverse proportional air
and the sped-up activities of clouds
as winds blow and roll empty trash cans down the street.
Pears and peaches, store-bought, slowly rot
in the fridge, and unattended bills continue to penalize
regardless of who is president of the land.

Jazz and espresso will be as permanent as the Statue of Liberty;
at the tea shop ladies lament that the waitress will grow old.
Rivers burn in the middle of December,
and veterans of unsung daily battles for bread
think in their meditative moments of bovine pastures.
I try to keep an orderly room so that chaos is minimal
because nightly a startling feeling inside my sleep
makes me flee across the pillows of a Third Avenue hotel,
and this time I am fleeing with a ledger,
with the photo of the last girl,
and, hatless in a light rain, seeing
all the cigarette butts in North Beach as the Normandy Invasion.
I shrug, shrug and am gone.

My assignment then, was to look carefully–lovingly, compassionately–at all that was going on around me and try to create my own catalog to hold it.

One of the pleasures of having a poetry book is that at poetry readings I am sometimes asked to trade copies with another poet. That’s how I came upon Water Chasing Water by Koon Woon. Our conversation also resulted in the review of Sparrow at Five Willows.

So here is the poem that spoke to me this morning:

THE QUESTION I WANT TO ASK

A command sets a thousand horses galloping
while a question merely drops a frog into a pond.
Elsewhere the required question is not the same.
Elsewhere they ask for rain, for harvests, and for newborns
to pick up the heavy plows.
Elsewhere there are infants to pick up, messages to scurry.
One nation is on fire, another in revolt, still a third one quakes.

I peer out at the pond. I am the dwarf of Socrates
looking at humanity, the midget of Isaac Newton looking
at the invisible gravity.
The frog sits on a single lotus leaf, its eyes pinhole cameras
to record its domain
from an ill-defined mosquito to a very deliberate water snake.

It has been ten years since the frog leaped from my mouth.
At water’s edge the water lilies have transformed
from buds to jungle foliage, and every cell in my body
has been washed and replaced.
Grassy fields have turned golden, then brown.

I ask the wind if it would listen.
Elsewhere the wind sweeps a fire across a prairie.
The pond now smooth as a bald man’s head,
swallows my question but gives no answer.
But I am no longer disappointed that it is so, and
the thousand horses that went galloping
return now of their own accord.