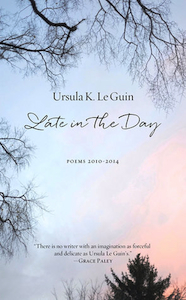 Although Ursula K. Le Guin died this past January, I would like to argue that we have not lost her voice, or her capacious and expansive soul.

I fell in love with this hardback book, Late in the Day (PM Press, 2016) and its gorgeous cover. Each time I saw it in the bookstore, I picked it up and reread the first poem, this one:

The Small Indian Pestle at the Applegate House

Dense, heavy, fine-grained, dark basalt
worn river-smooth all round, a cylinder
with blunt round ends, a tool: you know it when
you feel the subtle central turn or curve
that shapes it to the hand, was shaped by hands,
year after year after year, by women’s hands
that held it here, just where it must be held
to fall of its own weight into the shallow bowl
and crush the seeds and rise and fall again
setting the rhythm of the soft, dull song
that worked itself at length into the stone,
so when I picked it up it told me how
to hold and heft it, put my fingers where
those fingers were that softly wore it down
to this fine shape that fits and fills my hand,
this weight that wants to fall and, falling, sing.

Le Guin was best known as a writer of science fiction, but she was also an essayist and a teacher (read her Steering the Craft, for an excellent example). What I notice about this poem, “The Small Indian Pestle,”  is that it is a little craft lesson all on its own. Its 16 lines in iambic pentameter are also a single sentence (the : may be cheating). It doesn’t rhyme, but the words are so strong–“Dense, heavy, fine-grained, dark basalt”–and the repetitions are so well-executed that it’s music.

Elsewhere in the book, she plays very deliberately with form and rhyme (and writes about it in a closing essay). I’m going to break with my usual routine and share one more poem, a rhymed one, that touched me in a very deep place.

Between the acts, the interval.
The leaves were late to fall, this fall.

Between the verdict and the doom,
a whisper in the waiting-room.

A non-event between events
holding a secret and a sense.

“Between” is deceptively simple. It shows us how one needn’t be showy and ostentatious in order to be profound. 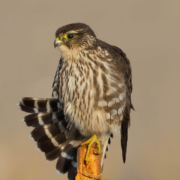 Samuel Green’s All That Might Be Done
Scroll to top