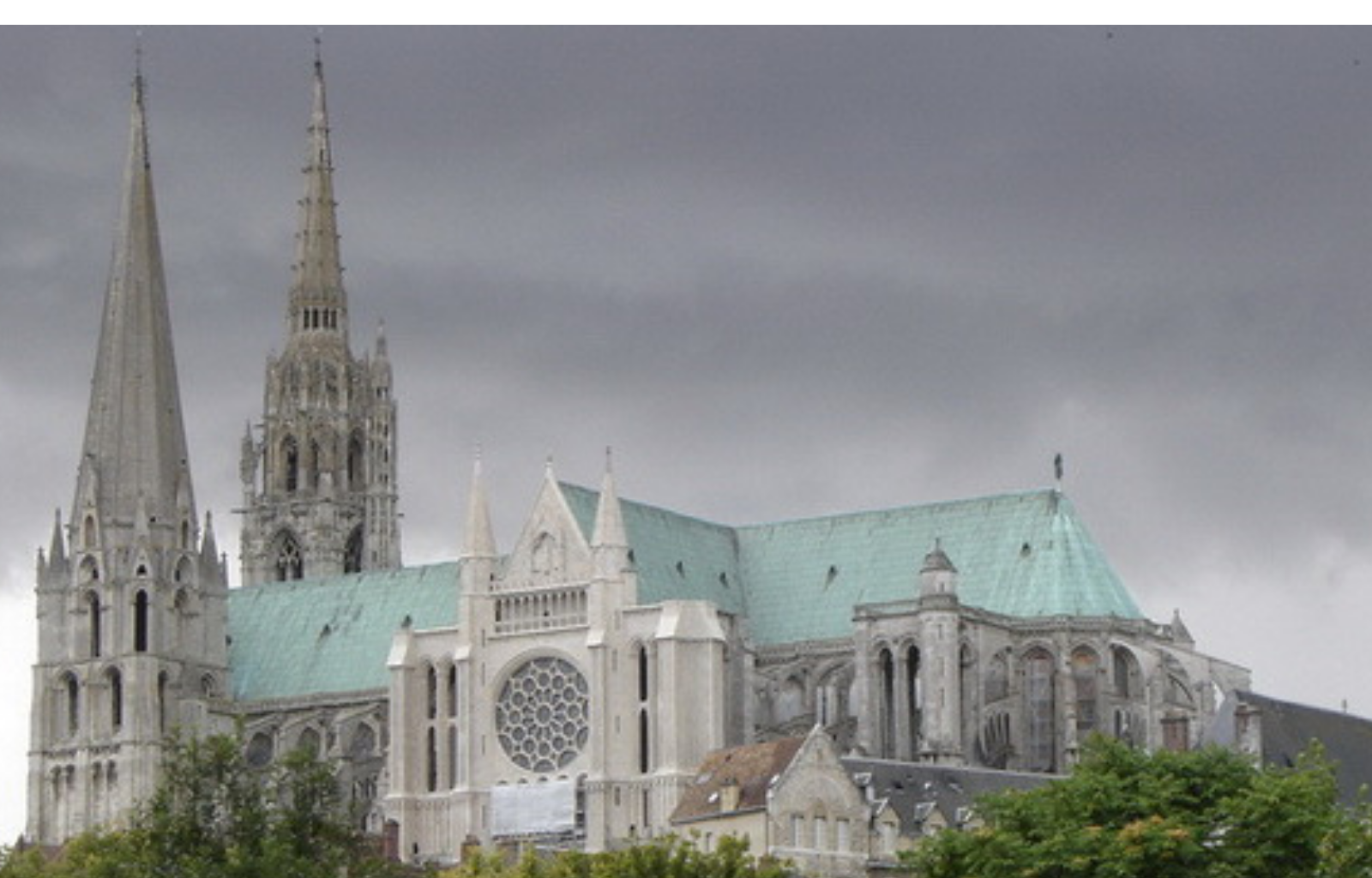 Astonished. That was the word I chose during our writing workshop in Chartres, to describe my journey — to France (how did I get so lucky?); through the 12th century labyrinth in the cathedral (frankly unexpected); and in my life generally. It’s a word that nicely describes my second week in France, too. Paris was astonishing and I was astonished. Think stunned. Think stoned. That was me.

I’m now home (3 days since — but when will I remember how to sleep at night and be awake during the day?) and I’m still feeling pretty astonished.

After months of anticipating my trip to Chartres and Paris, after years of thinking that someday I would go to France and see what all the fuss is about…it’s over. I’m still feeling jet-lagged (the nine-hour time difference has my days and nights mixed up), and a bit in denial that I’m really really back home. I’m still feeling the wave of excitement that came with the trip, and simultaneously feeling let-down. (Did I say I’ve not figured out how to sleep?)

No wonder it’s so hard to process. 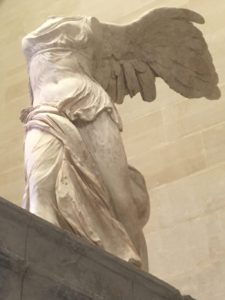 People ask me what the highlights were and — if I skip over Chartres (which was like a long tidal wave of highlights — and go straight to Paris, I get stuck again.

We visited Père Lachaise Cemetery and saw the graves of Jim Morrison, Oscar Wilde, and Heloise and Abelard.

We had an amazing 2 hour personal tour of the city (enhanced by a moon-lighting rock-musician tour guide ).

We went to the Musee de L’Orangerie and sat in the oval rooms Monet designed to showcase his waterlilies canvases.

We couldn’t go inside Notre Dame, of course, though we visited Sacre Coeur and Saint Pierre’s at Montmartre (near our apartment), and stood in line to see (more) stained glass windows at Saint Chapelle, plus learned about the arduous and scientific process by which the windows are cleaned and restored. 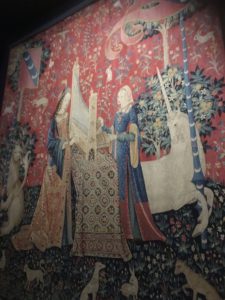 The Lady and the Unicorn tapestry (ca. 1500) at The Cluny

We went to the Rodin Museum, the Cluny, the Louvre (of course), and Musee D’Orsay.

How exactly do I even begin to touch on the highlights amid the art treasures I saw, when there were so many? Although I took several memorable Art History courses as an undergraduate, seeing the buildings, paintings, and sculptures in person was — just as my professors often said — mind-blowing.

Every day we rode the Paris Metro, and that, too, has to be experienced first-hand in order to be understood (so many trains! so many people!). I kept thinking of Ezra Pound’s couplet, “In a Station of the Metro” —

The apparition of these faces in the crowd:  Petals on a wet, black bough.

So many faces, such a press of bodies and odors and colors and sound.

What else? Of course we went to Shakespeare & Co., we ate a lot of terrific food, and we walked miles and miles (4-5 miles per day). We took naps (much needed, as our sleep was all cockeyed while there, too).

And, being writers, we wrote. 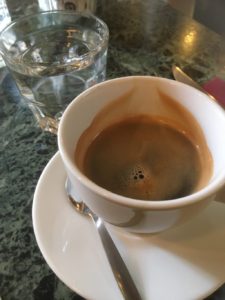 Oh, and we went to #spokenwordparis at Au Chat Noir and READ OUR POEMS on the open mike (it’s a gathering of mostly anglo-philes, but I still can’t believe we had the nerve to do this).

What else can I say? (So much.) Paris was not what I expected. (What did I expect?) It became clear to me by the end of the week that I could go back every year and discover another Paris. I’m grateful to my friend Francine for inviting me to join her (and who can parlez-vous Francais way better than I — though I did  figure out how to order coffee).

I really wanted to let you know how the trip went, so forgive me for giving it all in a rush and with so little detail. There is a lot more I could share.

But all I really want right now is to sleep for about 10 hours straight. Then maybe I’ll have the presence of mind to begin unraveling all the pages and pages I scribbled while on this astonishing trip.

The Poet in Paris

Writing the Labyrinth
Scroll to top