Blog
You are here: Home / Blog / Reading / What I’m Reading 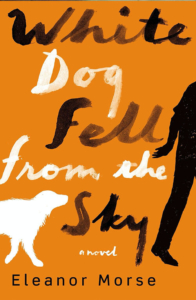 These past few months I have been on a reading binge — dozens of mystery novels, of course, and tons of poetry. But I just finished reading a novel, White Dog Fell from the Sky, by Eleanor Morse, that is so jaw-droppingly well-written and gripping that I want to buy a sackful of copies and give them to all of my friends. Barring that, telling you about it will have to suffice.

Set in Botswana in 1977, White Dog tells the intertwined stories of a South African medical student, Isaac Muthethe, who has had to flee his homeland; and Alice Mendelssohn, an American who followed her husband to Botswana, and, despite the end of her marriage, stays on. I don’t want to share much more of the plot than that. I think part of my pleasure in this book came from the unexpected and yet 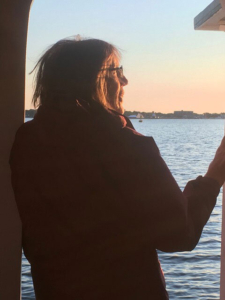 perfectly wrought twists of the track. Yes, at times it felt like watching a train wreck. At times, I wanted to set the novel aside and not read another word. I couldn’t help but plunge on.

Morse has a talent for letting ordinary descriptions shift into reverie:

The lilac-breasted roller flew again. [Alice] thought it must be the most beautiful bird ever created, with its shining wings, aqua tipped with deeper blue, its lilac throat and breast, white feathered forehead, and perfect dark eye. She thought of God speaking out of the whirlwind, how He reminded Job (as though he needed reminding by then) who had caused the morning stars to sing, who shut up the sea with doors and commanded the proud waves to come only this far, no farther. If He could harness the stars and the ocean, why could He not harness cruelty? Was it more powerful than all the stars and oceans? (289) 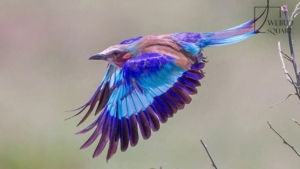 I’m tempted to share one of the sweeping philosophical passages from late in the novel, but that, too, may give too much away. What I do want to convey is the lushness of Morse’s prose. It is never so ornate that it intrudes on the story, but enhances it, and becomes part of the trippiness of the whole experience. Sometimes beautiful, often brutal, it felt absolutely true. In this novel, there are no easy answers — no magical realism, no superpowers to help Isaac and Alice get out of their troubles. It doesn’t settle into that familiar track of the romance. All they have to work with are the truths of their time and place and their humanity.

Here are two paragraphs from the first chapter, just to give you a taste. Isaac, who has been transported in the bottom of a hearse from South Africa to Botswana, wakes to this scene:

A thin white dog sat next to him, like a ghost. It frightened him when he turned his head and saw her. He was not expecting a dog, especially not a dog of that sort. Normally he would have chased a strange dog away. But there was no strength in his body. He could only lie on the ground. I am already dead, he thought, and this is my companion. When you die, you are given a brother or a sister for your journey, and this creature is white so it can be seen in the land of the dead. The white dog’s nose pointed away from him. From time to time, her eyes looked sideways in his direction and looked away. Her ears were back, her paws folded one over the other. She was a stately dog, a proper-acting dog.

A cigarette wrapper tumbled across the ground, stopped a moment, and blew on. A cream soda can lay under a stunted acacia, its orange label faded almost to white. Seeing those things, he thought, I am not dead. You would not be finding trash in the realm of the dead. (1-2)

In another book I just began reading this morning, Ursula K. Le Guin’s Words Are My Matter: Writings on Life and Books, I came across a passage that does a fine job explaining why we read fiction. Le Guin also goes into how people often read: only for the operating instructions. But this is how Le Guin concludes her essay, “The Operating Instructions”:

The reason literacy is important is that literature is the operating instructions. The best manual we have. The most useful guide to the country we’re visiting, life. (6)

The Autumn Equinox
Scroll to top