Blog
You are here: Home / Blog / Poetry / What Is Poetry?

My daughter just finished a unit on writing poetry with her middle- and high-schoolers. Last night she read one of their poems aloud to me. If you teach poetry, the prompt may be familiar to you (I think it must have been this one, or one like it: https://englishlinx.com/poetry/i-am-poem-part1.html). The student’s refrain is:

“I am someone dreadfully tired of my cat.”

It goes on, filled with weird specific outrages committed by the cat. My teacher-daughter, her sister, and I were all cracking up by the time it ended. (Perhaps you had to be there to “get it.”) Trust me, the poem was hysterical (and, if you are worried, it was obvious that this student was all wrapped up in her relationship with her kitty).

Our conversation led me to think about the poetry books I’ve read—or am reading—lately. So I’m interrupting my poetry-book-a-day binge to share those with you. Two of the books were recommended by Sharon Bryan in her Hugo House course last fall. And the third was an impulse buy, the last time I visited an actual bricks-and-mortar bookstore. 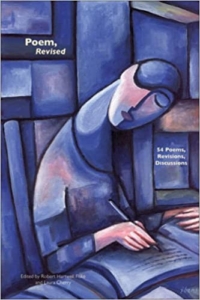 Poem, Revised, edited by Robert Hartwell Fiske and Laura Cherry (Marion St. Press, 2008), collects 50+ essays by poets about their revision process of a specific poem. Mark Vinz’s poem “The Penitent” began as prose, an attempt to get down on paper a memory that had come to him on a sleepless night. It went through many drafts before it appeared in Prairie Schooner. He cites another much-loved poetry book on my shelf:

As Richard Hugo says in Triggering Town, poems tend to have two subjects—what triggers or generates them and what the author discovers they’re really about, which is what emerges through the process of revision. (p. 46)

I found Kathleen Flenniken’s essay especially useful. I’ve been rushing—driving myself—to get a manuscript together, but she writes about setting aside a poem for eight months: “it didn’t have the power I hoped for,” and only then coming back to it, slowly, letting it find itself. The process included her readers, “mentors, more precisely” (p. 300).

The second book is Poetic Closure: A Study of How Poems End, by Barbara Herrnstein Smith (University of 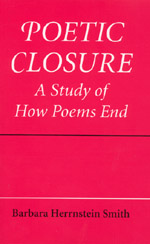 Chicago Press, 1968). I’ve been reading a few pages a day of this book and, initially, I wasn’t sure it would be helpful (much emphasis on centuries-old poems). But it has won me over.

First of all, a poem cannot be regarded as totally independent of the poet’s and reader’s extrinsic experiences—not if we recognize that our experiences include language itself, and that it is upon our past linguistic experiences that poetry depends for its most characteristic effects. Moreover, a poem does not, like the proposition systems of mathematical logic, make its own rules; it adopts and adapts the rules (i.e., the conventions) of nonliterary discourse, so that the principles which generate and conclude the one are conspicuously reflected in those of the other. (p. 97)

Herrnstein Smith’s book is not a light read, but it’s now filled with highlighted passages like this line: “successful closure is never a matter of merely gratifying the reader’s conditioned expectations” (p. 138), or—I might add—our own expectations. As Mark Vinz observed, we discover what the poem is about as we revise.

It is not likely that my daughter will be reading either Poem, Revised or Poetic Closure. But a third book is very 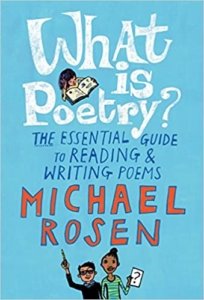 likely going to be passed along to her: What Is Poetry: The Essential Guide to Reading & Writing Poems, by Michael Rosen (Candlewick Press, 2016).

What Is Poetry is illustrated by Jill Calder, and illustrated in another way by nursery rhymes and ditties and short poems that do what Rosen feels poetry must always do: surprise. (No surprise that the other two books emphasize this as well.) It is pretty obviously aimed toward a younger audience, but I loved it.

Under the heading, “Poetry Can Give an Impression,” Rosen offers this poem, right out of my own childhood:

From a Railway Carriage

Faster than fairies, faster than witches,
Bridges and houses, hedges and ditches;
And charging along like troops in a battle,
All through the meadows the horses and cattle;
All of the sights of the hill and the plain
Fly as thick as driving rain;
And ever again in the wink of an eye,
Painted stations whistle by.

Here is a child who clambers and scrambles,
All by himself and gathering brambles;
Here is a tramp who stands and gazes;
And here is the green for stringing the daisies!
Here is a cart run away in the road
Lumping along with man and load;
And here is a mill and there is a river:
Each a glimpse and gone for ever!