Blog
You are here: Home / Blog / Uncategorized / It Takes a Villain to Make a Good Story 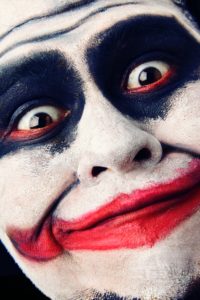 I have been thinking about villains; specifically, I have been wondering why it is that oppressive regimes often give rise to the best art, and why apathy is converted to action by conflict. I have been brooding on how it is that we (that I) will do almost anything to avoid conflict, when — obviously — it is so good for us. Is enlightenment possible without it? Can you play music on strings that have no tension? I think it was Helen Keller who said that it isn’t an absence of hardship that makes us strong, but mastery of it.

As writers, we can’t steep ourselves in a world view that reflects only our own view. We can’t wallow (not for too long). We have to be willing to interview the vampire, deal with the devil, and shake hands with opposing view points. We have to invite in the other, respectfully, and we have to listen much much more than we talk.

If you want to stand up for social justice, then you will need to explore what its opposite looks like.

“To write what you know needn’t mean a fictional rehashing of your own circumstances: it sometimes means taking a single strand from your own life – a small incident, an inexplicably resonant encounter, an unnamed feeling – and giving it to another, a fictional creation with whom you share not race or gender or history, but something both less defining and yet also more profound. A writer cannot make only characters who resemble her; she must allow herself a literary transgression, even if she is not certain she can pull it off – the best characters are always the most frightening to write, and they are frightening to write because they are unlike you, because they are creations, because they appear to be not mere replications of the self. It is, ironically, those characters who are also truest, because in their differences, their othernesses, they make the writer confront the largest, most troubling questions about how we live. To write this way may not be brave: but it is unafraid, and sometimes, in art, one is just as good as the other.” –HANYA YANAGIHARA

(Thanks to Advice to Writers for this quote; my emphasis added)

Poets are the unacknowledged legislators of the world (Percy Bysshe Shelley... Your Job
Scroll to top