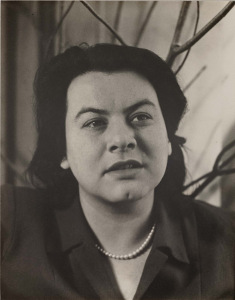 I have a modest goal to post something here each week, and this week–quite busy with other things–I thought I’d simply stick in a quote. But the book I picked up was Muriel Rukeyser‘s Out of Silence: Selected Poems, and it inspired me to try a little harder.

In February it was my pleasure to attend a 2-day virtual conference on Rukeyser’s work, reception, and influence.  I knew Rukeyser, previously, from a handful of anthologized poems and her splendid book, The Life of Poetry. I’m still processing all I heard there, reading and rereading her poems; I’ve just begun reading her novel, Savage Coast. (Until a panelist presented on it, I hadn’t known the novel existed.) I particularly enjoyed the presentation by her former student, Dennis J Bernstein, a poet and radio producer who documented Rukeyser in her final years. My friend and mentor, Professor Vivian Pollak, presented on the Elegies and their contemporary reception (often brutal, despite Rukeyser’s ground-breaking work).

I wanted to share a passage from the preface to her poems:

She was never what is sometimes called a poet’s poet–the exquisite practitioner of craft capable of making other poets envy her sheer technical skill. She wrote for a far larger audience, seeking readers in ordinary people, as well as among those who understood the difficulties of modern poetry. “Writing is only another way of giving,” she believed, “a courtesy, if you will, and a form of love.” And so the search for the mot juste gave way to the larger goals she pursued in poetry: “the universe of emotional truth” and “an approach to the truth of feeling.” -Kate Daniels, “In Order to Feel” [Rukeyser’s words, in quotations, are from The Life of Poetry]

This strikes me as a manifesto for writing, something I need to post, and circle back and reread.

The featured photograph is by Imogen Cunningham.