Blog
You are here: Home / Blog / Healing / Pearls of Wisdom

A friend read this aloud to me recently. When she sent me the link to where she had found it, I was delighted to see that its author is Rachel Naomi Remen, author of Kitchen Table Wisdom. 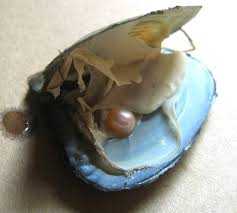 times used to describe groups of birds and beasts.  Many of these go back five hundred years or more, and lists of them appeared as early as 1440 in some of the first books printed in English.  These words frequently offer an insight into the nature of the animals or birds they describe.  Sometimes this is factual and sometimes poetic.  Occasionally it is profound:  a pride of lions, a party of jays, an ostentation of peacocks, an exaltation of larks, a gaggle of geese, a charm of finches, a bed of clams, a school of fish, a cloud of gnats, and a parliament of owls are some examples.  Over time, these sorts of words have been extended to other things as well.  One of my favorites is pearls of wisdom.

An oyster is soft, tender, and vulnerable.  Without the sanctuary of its shell it could not survive.  But oysters must open their shells in order to “breathe” water.  Sometimes while an oyster is breathing, a grain of sand will enter its shell and become a part of its life from then on.

Such grains of sand cause pain, but an oyster does not alter its soft nature because of this.  It does not become hard and leathery in order not to feel.  It continues to entrust itself to the ocean, to open and breathe in order to live.  But it does respond.

Slowly and patiently, the oyster wraps the grain of sand in thin translucent layers until, over time, it has created something of great value in the place where it was most vulnerable to its pain.  A pearl might be thought of as an oyster’s response to its suffering.  Not every oyster can do this.  Oysters that do are far more valuable to people than oysters that do not.

Sand is a way of life for an oyster.  If you are soft and tender and must live on the sandy floor of the ocean, making pearls becomes a necessity if you are to live well.

Disappointment and loss are a part of every life.  Many times we can put such things behind us and get on with the rest of our lives.  But not everything is amenable to this approach.  Some things are too big or too deep to do this, and we will have to leave important parts of ourselves behind if we treat them in this way.  These are the places where wisdom begins to grow in us.  It begins with suffering that we do not avoid or rationalize or put behind us.  It starts with the realization that our loss, whatever it is, has become a part of us and has altered our lives so profoundly that we cannot go back to the way it was before.

Something in us can transform such suffering into wisdom.  The process of turning pain into wisdom often looks like a sorting process.  First we experience everything.  Then one by one we let things go, the anger, the blame, the sense of injustice, and finally even the pain itself, until all we have left is a deeper sense of the value of life and a greater capacity to live it.

Don’t Chicken Out
Scroll to top