You are here: Home / Blog / NaPoWriMo 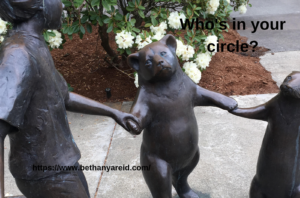 Today’s assignment at POETRYisEVERYTHING is to write a parody of a well-known poem. I decided, instead, to write an imitation.

One can’t improve on the Beatitudes from Matthew, but they make for an interesting foundation, a kind of map to explore other kinds of blessings. (I remembered, as I worked on my imitation, that “to bless” means, etymologically, “to wound.”) I started writing with the intention of being light, and then it…sort of changed. I’ll let it compost in the drafts file and see if something else cooks up from it.

Blessed are the parents of infants, sleep starved as mystics, endlessly rocking, for they shall see visions of all that is possible.

Blessed are the parents of toddlers for they shall learn the limits of earthly patience.

Blessed is any parent of an ailing child for they shall be exposed to their own limitations, they will learn the limits of their own too-permeable limits.

Blessed are the parents of seven-year-olds for they shall be called wise and, if truly wise, they will know how foolish and how brief wisdom can be.

Blessed are the parents of fourteen-year-olds, for, as in the days with toddlers, they will grow infinite patience and yet none will call them wise.

The prompt today is to write a poem inspired by hands. (For more details, go to POETRYisEVERYTHING.)

I am reading a novel in which the characters
recognize one another not by their faces,
not by their expressive eyes,
their noses, their lips, not even by height

or the color of their hair or the sound of their voices,
but by their hands. By their hands.
It makes me feel incompetent.
My oldest daughter, I think, knew my hands best,

would scream when anyone else
picked her up. But would I know her hands today,
I mean, if they were all I had to go by?
I’m not sure I could recognize even my own mother

by just her hands. Meanwhile, across from me,
my youngest daughter is learning chords on the guitar.
She knots her left hand over the strings,
a freckle on her index finger.

Her fingers are shorter than mine. The nails
are short, blunt. I ask her to hold up
her hand, to show me her palm,
and she has an X dangling from her lifeline.

She strums E Minor, and then G,
then she looks up and catches me watching her.
She crosses her brown eyes,
sticks out her tongue.

No, I am not actually reading such a novel (maybe I will write it). And I am not sure this qualifies as a poem. It could be a prose free-write. Oh, well. Don’t make excuses, make poems! Tomorrow: an acrostic. 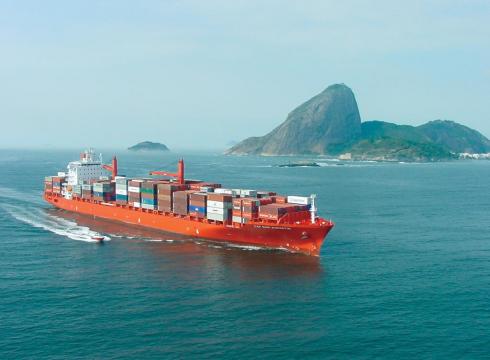 from travel.usatoday.com, “Is a Freighter Cruise for You?”

As I didn’t do a great job of writing my ghazal (mine is not syllabic, for instance), I thought I’d direct you to Chris Jarmick’s prompt for today’s poem. I’ve always wanted to try a cross-out. I’m not satisfied with the result, but I am inspired to try more of them. And maybe it’s the sort of thing one has to practice? Anyway, here’s the prompt. My poem appears at the end of this post.

The cross out or rub out/erasure poem is a type of FOUND poem using existing material. You will be crossing out words you don’t want in your poem from another source. Here’s what I’d like you to try to do.

Take a newspaper, magazine article or piece of text (I’d suggest of several thousand words in length) or an internet version of such. Do not change the order of any of the words when you create your poem. In other words you could look at the previous sentence (Do not change….) and create; DO CHANGE THE WORDS but you should not make this sentence: CREATE THE ORDER OF WORDS (because you’ve changed the order of the words as they originally appear).

In each line your new poem should include two words or three words that have been kept together exactly as they appeared in the original article but do not use more than THREE WORDS in a row as they originally appeared. In my example ‘the words’ appeared in the original text and in the new line of the poem. You may not change the words in any way to ‘make them fit’. Don’t make something plural or past tense. You use what is there and create something different with it. You do not have to keep the same idea or theme as the original (but you can keep it the same if you really want to). The text is simply a bunch of words that you are re-using to create your poem.

Your poem should be at least 6 lines long. And it should be somewhat poetic. (you can add some additional rules if you would like: Have a consistent pattern regarding the number of syllables in your lines – every line is 10 or 12 syllables. Or line 1 is 10 syllables, lines two is 12, line 3 is 10, line 4 is 12 etc. You can rhyme the first and second or first and third lines and the last lines in similar fashion.

Remember you are creating something poetic with your cross-out/erasure found poem.)

I picked up the Feb. 3, 2014 edition of The New Yorker, and used Patricia Marx’s “A Tale of a Tub” (pages 26-28; it’s about a freighter cruise, hence, the picture). Have I created something poetic? I don’t know. Logical? Definitely not. (Playful, yes.)

One Sort of Voyage

Hankering lovely, hurly-burly world
no handful over submarines, everything in short —

neglected plum varnished into the shape
of a peacock. Precipitately

camouflaged, accompanied, flushed),
you did not ever have to stay —

dusk, a box of ginger snaps,
my reverse trip, approximately my disaster.

Finally, here’s a link to Chocolate Is a Verb, a blog featuring a variant of this sort of exercise — almost every day!

“If writing is your practice, the only way to fail is not to write.” -Gail Sher

My assignment today is to write an inappropriate poem. Keep it PG, Chris said, and, Don’t tell me you don’t know what I mean.

Told to write an inappropriate poem, I begin thinking about sex,
and then I think, no,
and so I have to wonder what else might be
inappropriate enough to satisfy my instructor, who,
after all, is invisible, some guy on the Internet
throwing out suggestions all month long. And I think of comparisons
to how he throws out these suggestions,
maybe to 14-year-old boys
and masturbation, and then I blush,
and I try to keep on the track of what else might be inappropriate.
Anger, maybe, of which I have an especially large store,
or maybe those awful your-mother jokes
that my teenagers and their friends like to tell.

And then self-pity shows up and I remember how sorry
I was feeling for myself
just this morning, how, just as my self-pity crested, a wave of self-pity
because I have a broken ankle, because I have to use
these damn crutches, I opened the newspaper and found a story
about a young mother caught in a landslide,
her ankles broken, her arm broken,
trapped, and even so clutching her baby to her chest
and screaming herself hoarse, for hours,
until they were rescued.
I would like to say that my response was a simple awe
at her, and prayers for her, or even a quick check on my own children,
but instead —  I wallowed in even more self-pity, sorry for myself
for being such a pathetic excuse for a human being,

and right now I am wishing I had just buckled down to it,
and written a really rip-roaring, inappropriate poem about sex.

Pretty pathetic beside Sharon Olds and her “Ode to a Douchebag.” (Click on the link to hear her read a truly inappropriate, and hilarious poem.)