You are here: Home / Blog / parenting

I met Lucille Clifton the first time, I think, in 1991 when she came to the University of Washington to read for our Watermark series. Her larger-than-life personality and her brash honesty about being black, about being female, swept me away. I was in the MFA program and I thought I had something to say. But I was too young, too sheltered, too inexperienced to have written the poems she had written: “homage to my hips,” or “lumpectomy eve,” or “in the meantime” (“the Lord of loaves and fishes / frowns as the children of / Haiti Somalia Bosnia Rwanda Everyhere / float onto the boats of their bellies / and die”). There seemed no subject that was so controversial she wouldn’t take a crack at it, and I was in awe of her. 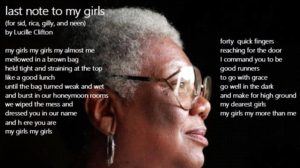 At the reception after the reading, another young poet started telling Clifton all about herself. I knew it was nerves, but it was still a little stunning to see her binge-talk through the entire conversation. When she walked away, Clifton said, laughing, “Does she ever listen? How does she ever learn anything?”

As a member of the Watermark committee I was gifted with the opportunity to drive her to the airport the next morning. She said, “Oh, drop me at the curb,” but I refused. Over breakfast, I told her a little about the “verse-writing” class that had recently been assigned to me. My professor and long-time mentor, Colleen McElroy, had advised that I teach them “one thing,” a thing that she would not divulge. I asked Lucille Clifton what she emphasized in her classes, and she began expounding. Listening and learning–not just from teachers, from everything–was the general theme. “And never stop,” she said.

I remembered that she had been a visiting poet at some university in the deep south, and when I asked her what she listened to and learned there, she said, “Oh, they thought they’d teach me something, but they learned something else.”

Lucille Clifton had six children. That, she admitted, had taught her plenty. She asked me if I had children, and when I said no, she was quick to say, “It’s not for everyone,” leading me to break down and share my infertility woes, and my tentative decision to adopt. “Well, do it then,” she said. “If it’s your path, it’s your path.”

Friday evening, conservative David Brooks said on the PBS news hour, that he can imagine a leader who will help our nation unite around a conversation about race. It strikes me that in that conversation, white people might spend most of their time listening. Maybe some learning will happen.

…The foxes are hungry, who could blame them for what they do?… –“Foxes in Winter,” Mary Oliver

who
can blame her for hunkering
into the doorwells at night,
the only blaze in the dark
the brush of her hopeful tail,
the only starlight
her little bared teeth?

and when she is not satisfied
who can blame her for refusing to leave,
for raising the one paw up and barking,
Master of the Hunt, why am i
not feeding, not being fed?

If you have been my student or talked about writing with me, then you probably already know that Priscilla Long, author of The Writer’s Portable Mentor and other books, has been my friend for 30 years.

We met while I was studying for my MFA in poetry at the University of Washington and Priscilla, for her fiction MFA. Or, she was supposed to be studying fiction. After taking a workshop with Colleen McElroy, we decided to exchange poetry manuscripts, and we began meeting for dinner almost every week to rework and deepen our poems.

At our table at the old College Inn in the university district, I confessed to Priscilla my very un-feminist craving for a baby and she told me, “For heaven’s sake! If you want a baby, have a baby! Don’t blame feminism!”

When my twins were a year old and I stalled on my Ph.D. dissertation, Priscilla saved me. “Send me seven pages! They can be terrible! Even with two babies you can write seven terrible pages!” She coaxed that dissertation out of me, never rewriting a single sentence, always telling me, “Of course you can do it!”

So, for those reasons and many others, I am very pleased to direct you to this bio, newly posted at History Link, the free on-line encyclopedia of Washington state history.

How did my daughters get so old?

Today my twins–Pearl and Annie–those tiny babies that we brought home in 1993–turn 26.

I have been reading old notebooks that I scribbled in when they were much younger (playing soccer, needing rides to friends’ houses and to the swimming pool), and I found this passage from the introduction to Steve Kowit’s In the Palm of Your Hand: The Poet’s Portable Workshop:

Poetry, in the end, is a spiritual endeavor. Though there is plenty of room to be playful and silly, there is much less room to be false, self-righteous, or small-minded. To write poetry is to perform an act of homage and celebration–even if one’s poems are full of rage, lamentation and despair. To write poetry of a higher order demands that we excise from our lives as much as we can that is petty and meretricious and that we open our hearts to the suffering of this world, imbuing our art with as luminous and compassionate a spirit as we can.

You could substitute parenting–and though I wish I could deny the moments of rage, lamentation and despair, there they are, inked across the pages of my notebooks. So, with my apologies to Kowit:

Parenting, in the end, is a spiritual endeavor. Though there is plenty of room to be playful and silly, there is much less room to be false, self-righteous, or small minded. To be a mother or a father is to perform an act of homage and celebration–even if one’s family life is sometimes buffeted by rage, lamentation and despair. To parent in this higher way demands that we excise from our lives as much as we can that is petty and meretricious and that we open our hearts to the suffering of this world, imbuing our interactions with our children with as luminous and compassionate a spirit as we can.

You could substitute teaching, or…anything. How can we, today, imbue our lives with a luminous and compassionate spirit?

My friend Louise says to her sons (and sometimes to me), “I’ve really enjoyed being on this bus ride with you.”

They are 26 now, and their baby sister will be 20 in 10 days. I can see them, still trying to figure out their lives, to become who they are. But I’m also a work in progress–still learning how to parent them. And I’m still working at that “luminous and compassionate” thing.

The first task of the poet is to create the person who will write the poems. 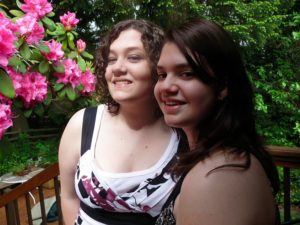 This morning — around 10:00 — I went to Staples and printed out my novel manuscript. I meant to take it home and give it to my beloved (he’s my final proofreader), but instead I went to Barnes & Noble and started reading. I have been reading all day! It’s good, I think it’s good. But I also finally — FINALLY — figured out my character Hannah and how she contrasts (and doesn’t merely mirror) the main character. So I had lots of little changes. And I’m almost all the way through. I’m so happy!

Luckily (in terms of my poetry goals), early this morning I spent some time with day 4’s NaPoWriMo assignment from POETRY IS EVERYTHING. I haven’t returned to it to try to make it better, and as it is almost 9 p.m. and I’m exhausted, I’m just going to post it, as is.  Shitty first draft.

I hope that you’re writing, too. Even just scribbling. It’s all good.

Think about a bus stop. You might write about the place, or make observations about people at the Bus Stop. Does it have a specific meaning you might want to try and convey? Can you imagine a Bus Stop experience (realistic or not) that would inspire a poem? Write it.

For another prompt or challenge be sure to check out Maureen Thorsen’s NaPoWriMo site where you’ll find prompts, challenges, comments, and information on all things NaPoWriMo.

An early bottle (4 a.m.), then an hour
on the dissertation. Mornings
I left the house in the dark
before my babies woke,
drove to the bus stop and stood in line
with the other commuters. Mounted the steps,
found a seat. I liked to sit by a window,
lean my head against it, close
my eyes. I smelled of milk,
of the ammonia of the diaper pail.

At 11:30, my class taught, office hour kept, an hour (more)
of writing, I was on the bus again,
reading tomorrow’s lesson and student papers.
At the bus stop, my husband waited, babies
buckled into the back seat
of the station wagon. He took my car
and left for his teaching job. I drove our daughters home,
unbuckled, unzipped. Diapers changed,
lunch doled out, naptime beckoning.

Housework beckoned, too. Kitchen to clean,
laundry (always diapers). I could have spent
those two hours of slumber
grading papers, or writing—
the unbiddable mountain of pages calling.

It was not unlike waiting in line at the bus stop–
what does one do but what the others do?
Inspired by the closed eyes of my drowsing babies,
the little fists propped against their mouths,
I folded, too. I crawled into my bed,
curled into a ball. I smelled of milk
and ammonia. I slept.