Now we will count to twelve
and we will all keep still.

For once on the face of the earth,
let’s not speak in any language;
let’s stop for one second,
and not move our arms so much.

It would be an exotic moment
without rush, without engines;
we would all be together
in a sudden strangeness.

Fisherman in the cold sea
would not harm whales
and the man gathering salt
would look at his hurt hands.

Those who prepare green wars,
wars with gas, wars with fire,
victories with no survivors,
would put on clean clothes
and walk about with their brothers
in the shade, doing nothing.

What I want should not be confused
with total inactivity.
Life is what it is about;
I want no truck with death.

If we were not so single-minded
about keeping our lives moving,
and for once could do nothing,
perhaps a huge silence
might interrupt this sadness
of never understanding ourselves
and of threatening ourselves with death.
Perhaps the earth can teach us
as when everything seems dead
and later proves to be alive.

Now I’ll count up to twelve
and you keep quiet and I will go.

What I would really like to do is have you listen to my friend Madelon read this poem aloud. 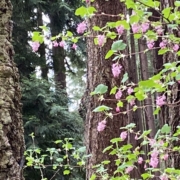 When I visited Edmonds Bookshop for my reading last week, I was inspired by a couple of things. First, I am almost certain that it was something I saw there (on the website? on a poster?) suggesting I plant a northwest shrub in honor of northwesterner and writer Ivan Doig, who died on April 9. So this weekend I bought a blossoming currant. (And snapped a picture for you.) 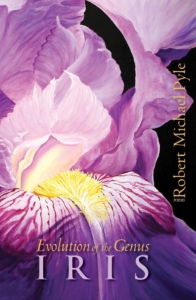 A second northwest impulse inspired by the bookshop — while browsing their poetry shelves, I found Robert Michael Pyle‘s Evolution of the Genus Iris. And even though I seriously do not need to buy any more books (!) I bought it. Here’s a poem for spring. And peace.

How the sidewalks flush and run
when cherries, crabs, and apples shed
their petal pelts. How exploded
blossoms soften concrete and stone.

In Colorado, nights before track meets,
I walked and walked, dreaming of Olympus,
holding in the exhalations of Hopa crabs
that lined our streets. Next day, the same cold
wind that always blew my discus down too soon
would strew the streets with pale pink disks.

Even now, when hard spring wind unclothes
the cherries in town and crabapples thicken
the night air, I feel the blunt rim of the discus
on my fingers, the cool rim of the pint on my lips.
And I think, as yet another April whiles itself
away in war,

how the pavements of Baghdad must go pink,
spattered with the petals of peaches and plums,
when the car bombs burst. How blossoms
soften exploded concrete and bone.

Maxine Kumin’s poetry, rich in horses, has always been dear to me. Here, from her 1978 book, The Retrieval System, is her poem, “Late Snow”:

It’s frail, this spring snow, it’s pot cheese
packing down underfoot. It flies out of the trees
at sunrise like a flock of migrant birds.
It slips in clumps off the barn roof,
wingless angels dropped by parachute.
Inside, I hear the horses knocking
aimlessly in their warm brown lockup,
as the soul must, confined under the breastbone.
Horses blowing their noses, coming awake,
shaking the sawdust bedding out of their coats.
They do not know what has fallen
out of the sky, colder than apple bloom,
since last night’s hay and oats.
They do not know how satisfactory
they look, set loose in the April sun,
nor what handsprings are turned under
my ribs with winter gone.